$21.6 Million Worth of Cannabis Seized In “Fields of Green” 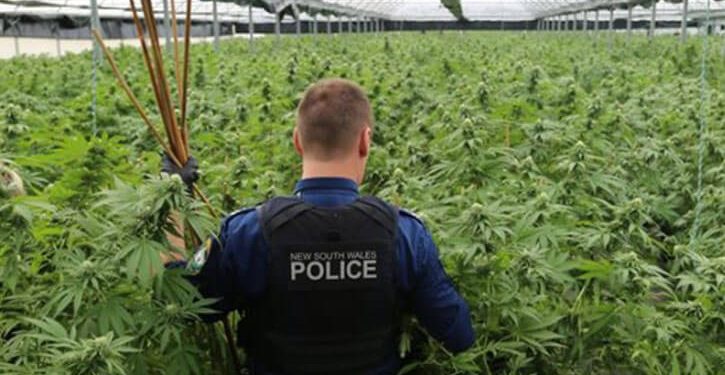 Australian police officer lost in a field of cannabis

A New South Wales raid has uncovered one of the largest cannabis crops ever found in Australia, as police seize $21.6 million worth of cannabis. Yep, you read that right – $21.6 million.

On Wednesday, NSW Police carried out a raid on a South-West NSW property, uncovering over 7,200 live cannabis plants in grow houses. Upon further investigation, over 50 kilograms of dried cannabis was also seized. Totalling a street value for the dried cannabis of more than $750,000, according to the average weed prices across Australia.

The raided property seems to have been the perfect setup for cannabis cultivation, as it included over 49-hectares of property in Gibberagee, which is over 52 kilometres south-east of Lismore. The property, which borders the Bungawalbin National Park, hosted 20 greenhouses. Each industrial-sized greenhouse was around 40 metres in length.

Inside the greenhouses was a scene Detective Superintendent John Watson described as ‘fields of green’. After the raid, he told the ABC:

Literally fields of green in greenhouses. The property itself was used solely for the purpose of cannabis cultivation.

During his ABC interview, Detective Watson reported that NSW Police believe the Gibberagee property may be linked to other NSW grow sites. Some of these grow sites have also been raided by police, who are currently carrying out Operation Strike Force Harthouse. As of today, Operation Strike Force Harthouse has seized more than $41 million worth of cannabis, raided three properties, and has resulted in the arrests of 12 people. However, investigations are ongoing.

Despite the expansiveness of the operation, only four men were charged at the Bungawalbin-Whiporie Road property. All four men were charged with the cultivation of cannabis in a large commercial quantity. In New South Wales, a ‘large commercial quantity’ is defined by the 1985 Drug Misuse and Trafficking Act as any amount of cannabis over 1,000 plants. While that seems like a lot of cannabis, it’s just 1/7th of what was uncovered at the Gibberagee property.

Those charged include Trong Tung Tan (35), Giant Hoang (37), Kien Sy Ngo (20) and Khac Ngoc Mai (34). Based on their names, it can be assumed they’re a part of the large Vietnamese criminal organisations which have established a firm foothold into the Australian cannabis black market.

All four men were refused bail after facing Lismore Local Court on Thursday. Legal action against them will continue in September, and if found guilty, each man faces up to twenty years in prison.

While NSW Police have really had their hands full with cannabis raids over the past month, this one really takes the cake (or vape).