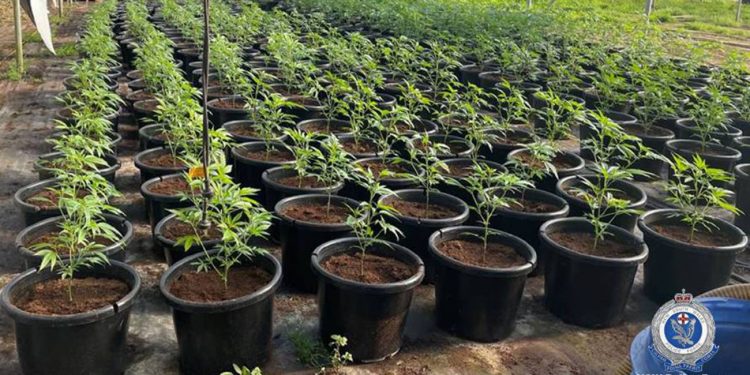 The cannabis was seized by officers from the State Crime Command’s Drug and Firearms Squad as part of an ongoing cannabis crackdown named ‘Strike Force Harthouse’. Detectives found the cannabis after carrying out a search warrant at a property on Prices Road at 5 am on August 4th.

While searching the property, police found six greenhouses full of cannabis and cannabis cultivation equipment. In total, police seized over 1,200 cannabis plants which they believe have a potential street value of nearly $4.4 million. That makes the Douglas Park cannabis busts one of the biggest this year.

Detectives also seized equipment and arrested a 55-year-old Douglas Park local at the scene. They later took him to Narellan Police Station, where he was charged with two counts of participating in a criminal group, two counts of cultivating a prohibited plant (in a large commercial quantity) and dealing with the property proceeds of crime. He faced Picton Local Court on August 5th and was refused bail.

While they don’t believe the 55-year-old was solely responsible for the Douglas Park cannabis crop, police allege he was part of the drug syndicate running the farm.

The Douglas Park cannabis operation is only the latest drug house Strike Force Harthouse has discovered. In May and June this year, police from the operation raided four other properties, arrested three people (a 25-year-old, a 54-year-old and a 61-year-old) and seized over $6 million in cannabis. If you combine those seizures with the Douglas Park seizures, that’s over $10.5 million in cannabis gone from NSW’s streets.

Police will continue their investigations under Strike Force Harthouse, which has targeted cultivation and supply operations across NSW since 2019.